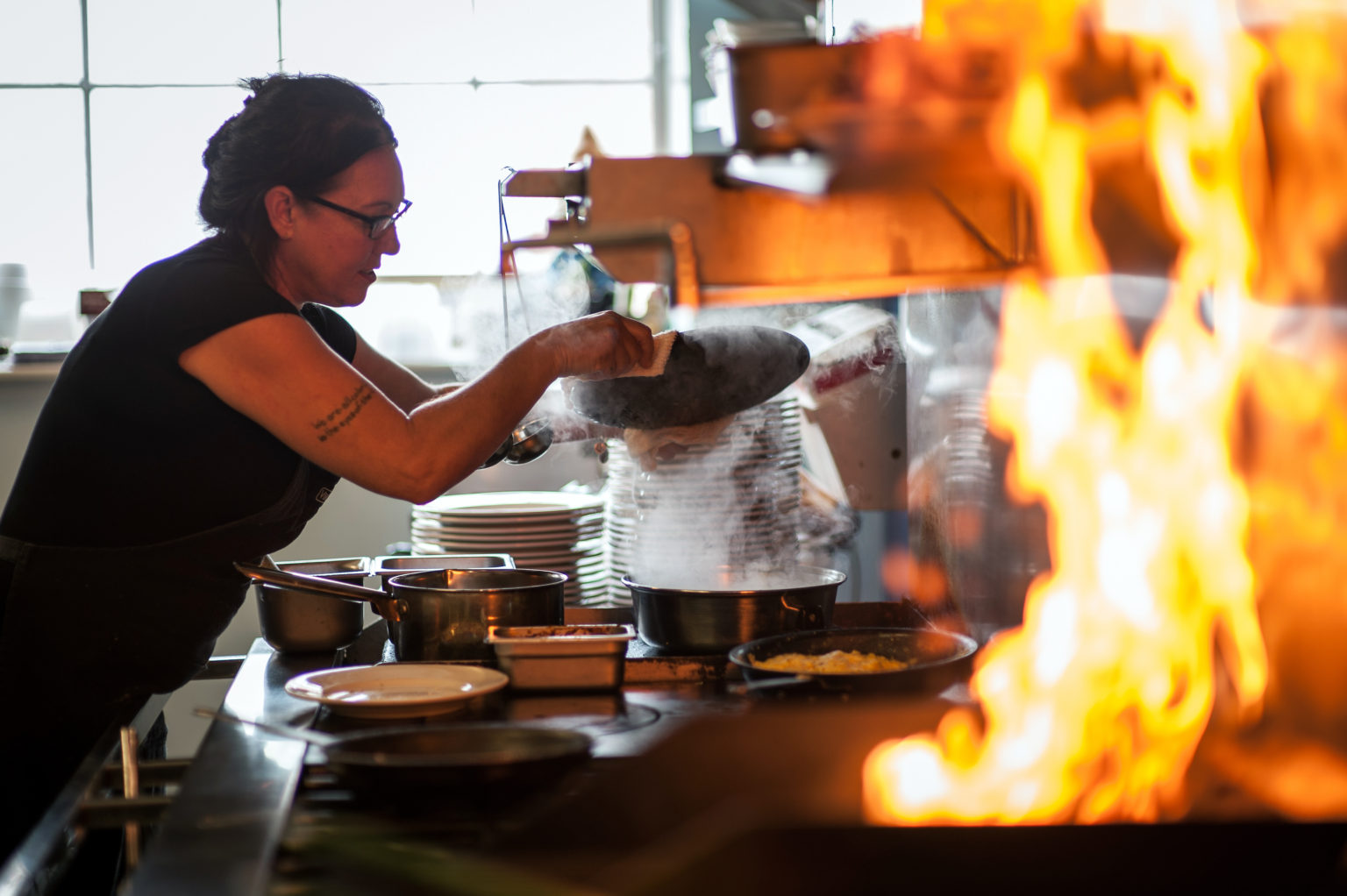 If you’re strolling down the Main Street of Greenwood, Mississippi, past dark, it’s hard to miss Fan and Johnny’s, with its well-lit storefront adorned with market lights and an inviting pair of windows strung with decorative flags. Inside is a narrow, brick-walled restaurant named after the maternal grandparents of James Beard Best Chef South semifinalist (and one of Southern Living’s Top 50 Women Chefs) Chef Taylor Bowen-Ricketts.

Do yourself a favor and don’t pass up the chance to pop in, have a seat at one of the vintage tables and enjoy a special from the every-changing daily menu, inspired by Bowen-Ricketts’ childhood visits to her grandparents’ house in Hammond, Louisiana. “Growing up in Jackson when I was younger, we would go to Fan and Johnny’s (house) most weekends,” said Bowen-Ricketts. “Two hours wasn’t far from my mom to get help for her four girls.”

As is often the case in grandma’s realm, the rules at Fan and Johnny’s house were more relaxed, and Bowen-Ricketts described mealtimes there as “more like festivals,” with fantastic flavors that didn’t appear in their normal routines. “Their food was so good. I wanted them to open a restaurant,” she explained. “They didn’t, but I did for them. After an extended restaurant career, this one seemed due.”

Bowen-Ricketts still uses tips she picked up from Fan and Johnny in Louisiana, and she notes that many of the flavors they introduced her to are traditional flavors of the Mississippi Delta. From them, she gained an appreciation for simple ingredients, such as fresh garlic, butter, lemon and black pepper; along with the ability to use those elements to create complex flavors. Her version of Jackson, Mississippi’s historic condiment, Comeback Sauce, is actually Johnny’s recipe. It crowns the fried alligator and fried green tomatoes.

“My grandparents would visit Jackson and my grandfather created a [Comeback] recipe of his own,” she explained. “That’s what I use.”

Much of the art that graces the walls at Fan and Johnny’s is her own. As a former fine art major in college, she still paints, and views cooking as a form of expression close to her heart. While the backbone of her changing menu is always derived from Fan and Johnny, Bowen-Ricketts uses that artistic spark to take creative strides of her own, with her daily specials and variety of thoughtful presentations. Aside from a decent amount of mainstay dishes, such as duck confit and shrimp and grits, no two menus are the same. “A good portion of my menu is old favorites,” she explained. “The rest changes daily with what I have on hand. That’s more of a spontaneous creative process.”

Bowen-Rickets’ contemporary take on Southern food-an example of which is her version of shrimp and grits, accompanied by smoked paprika cheese grits and refried red beans-comes with a respect for healthier choices.

“I try to emphasize a healthy twist,” she said. “I know the importance of quality food and how it directly affects our health. I think with good quality ingredients, we can create colorful menus that can be healthy and flavorful, and it can be a tool to educate people to a better lifestyle.”

Vegetarians are likely to enjoy such offerings in the meatless realm as black-eyed pea cakes with remoulade, blackened cauliflower, butter-broiled beets with chive sour cream, and a special tempura mushroom bahn mi. That said, the varying menus all have plentiful seafood and meat options, from fried catfish poboys and bacon linguine carbonara to lump crab risotto and Bowen-Ricketts’ Best Ever Burger. On the lighter side is an array of creative salads, like the West Indies salad, featuring marinated lump crabmeat and mandarin oranges.

A forever-evolving menu allows for greater culinary expression, so don’t be disappointed if one of those selections isn’t on the menu when you arrive. Whatever Bowen-Ricketts has replaced it with is likely even better.

In 2011, she was a semifinalist for James Beard Best Chef South and has earned mentions by Southern Living and USA Today in their lists of great women chefs, but even a renowned chef like Bowen-Ricketts comes up against some worthy menu competition in a city like Greenwood. She noted that one accolade she’s most proud of is being named Greenwood’s Favorite Restaurant, ever since she opened.

“There are many locally-owned family restaurants here that have been around for a long time. There are lots of great menus here,” she explained. “It’s a huge honor with the stiff competition.”

For more information, call the restaurant at (662) 374-5060, and find their daily menus posted on their Facebook page.