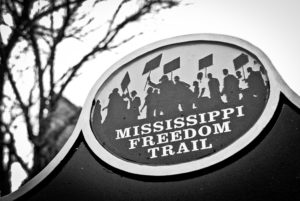 In the middle of the 20th Century, Greenwood and Leflore County witnessed a slow, but certain, shift in the winds of justice, a gathering spirit of hope, promise, and determination that what had been taken for so long would be taken no more. Those with deep roots in the Delta joined their voices with those from far away and vowed that they would not be turned back. Their steps can be traced, even today, in and around Greenwood. These important stories are captured in our brochure, Remembering the Struggle for Civil Rights: The Greenwood Sites

Two of our most noteworthy Civil Rights sites are:

The Mississippi Freedom Trail Marker is located in Money, about nine miles north of Greenwood. Fourteen-year-old Emmett Till came to this site to buy candy in August 1955. White shopkeeper Carolyn Bryant accused the black youth of flirting with her, and shortly thereafter, Till was abducted by Bryant’s husband and half-brother. Till’s tortured body was later found in the Tallahatchie River. The two men were tried and acquitted, but later sold their murder confession to Look magazine. Till’s death received international attention and is widely credited with sparking the American Civil Rights Movement. The store now lies in ruin, next to the Ben Roy Grocery, which was in operation many years after Bryant Grocery closed.
The store is also featured on the U.S. Civil Rights Trail.

To learn more about other sites that tell the story of Emmett Till, download the Emmett Till Memory Project app.

Mississippi Freedom Trail Marker located at Broad Street Park in Greenwood.
On June 16, 1966, Student Nonviolent Coordinating Committee (SNCC) chairman Stokely Carmichael, released from jail after defying City of Greenwood orders by putting up tents to house participants of the James Meredith “March Against Fear,” made his famous “Black Power” speech here to an agitated crowd of about 600. As Carmichael shouted, “We want black power!” the crowd became more and more enthusiastic. The popular slogan revealed a growing difference between the nationalist philosophy of SNCC and the more moderate stances of the NAACP and SCLC.

Back in the Day Museum

BY APPOINTMENT ONLY
204 Young Street
The Back in the Day Museum on Young Street is a community museum exploring the history of the blues, Baptist Town and African-American culture in the Delta. Tours are given by Greenwood native and owner Sylvester Hoover. Tours of Back in the Day Museum are by appointment only. For appointment scheduling and more information, please call (662) 392-5370.