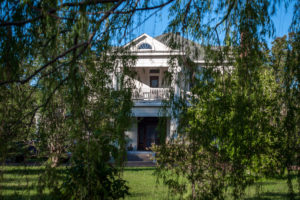 Greenwood is a city built on two rivers. The first river settlement was established in 1834 by John Williams, who purchased land along the south bank of the Yazoo River made available when the Choctaw Indians moved west. Williams decided it was an ideal place for a town and a good shipping point for cotton. Shortly thereafter, Titus Howard and Samuel B. Marsh settled land on both sides of the Yazoo adjacent to Williams’ settlement. They divided the land on the south side of the river into lots, and before long a town sprang up. Named for Greenwood Leflore, the last chief of the Choctaw Indians, the town incorporated in 1844.

The town grew as the cotton business grew, drawing cotton from miles around to be shipped out at Greenwood, though the big business of cotton marketing was still situated in the larger cities on the Mississippi River. The Civil War brought the end of the cotton boom in Mississippi, but Reconstruction would bring new life to the wilderness town of Greenwood.

In the 1880’s Congress implemented a plan to construct a levee system that would drain swamps and permit more cotton farming in the Delta. Once again Greenwood became the shipping point for thousands of bales of cotton. The railroad came to town, streets were paved and the cotton marketing business boomed as cotton offices appeared all along Front Street.

Greenwood was expanding every direction except north of the Yazoo River where the plantation of Senator J. Z. George was located. However, the turn of the century brought changes to Greenwood: a new courthouse, a grandiose Confederate Memorial, a new library and soon a new residential subdivision between the Yazoo and Tallahatchie rivers on the site of George’s former plantation.

Captain Sam Gwin, E. R. McShane and W. T. Loggins developed the plans for a boulevard that would span these two rivers. Gwin’s wife, Sally Humphreys Gwin, also had a hand in the development of Grand Boulevard, as she decided it would be lined entirely with large oak trees, not knowing how far-reaching that decision would be. She had servants transplant oak saplings from the banks of the Tallahatchie, and every day directed their placement along the Boulevard. Soon many of the large lots were purchased and homes were built.

Constructed in the fashionable styles of their times, each house showcased the wealth, prosperity and respectability that had come to Greenwood. In the 1920s it became apparent that a new bridge across the Yazoo was needed to replace the old 1894 drawbridge, and the Keesler Bridge was constructed. This steel swing bridge was built on concrete piers with wooden walkways lining either side. Keesler Bridge was designed to rotate on a center pier to create a passageway for river traffic and formally opened in 1925.

While the town of Greenwood escaped the devastation caused by the Mississippi River Flood of 1927, it was not entirely immune to the threats of the rivers. In 1932, the Tallahatchie River overflowed its banks and moved down Grand Boulevard to the Yazoo River. Most of the houses were built high enough to escape any real damage, but there was so much water that cars gave way to boats as the town constructed a wooden pier down the Boulevard.

Through the years Grand Boulevard has remained Greenwood’s premier street and neighborhood. It truly reflects the prosperity of the city and its position as the center of Mississippi’s second cotton kingdom. While some of the lots have been subdivided, many are still several acres with beautifully landscaped yards. Between the Yazoo and Tallahatchie Rivers are Greenwood’s finest example of homes in the Neo-classical Revival, Tudor, Spanish Eclectic and Prairie styles. And of course, there still remains the beauty and shade of the towering oaks planted long ago by Mrs. Gwin. Her idea and work have brought joy to generations of citizens as they stroll through time along Grand Boulevard.

1. 209 Grand Boulevard, at the corner of Grand Boulevard and President, is a wonderful example of the Tudor style. The house displays many typical elements of this style, such as the stuccoed exterior above a brick wainscoting and the half-timbering in the gable ends. Several Craftsman influences can also be found in this home, including the low-pitched roof and brackets under the porte-cochere.