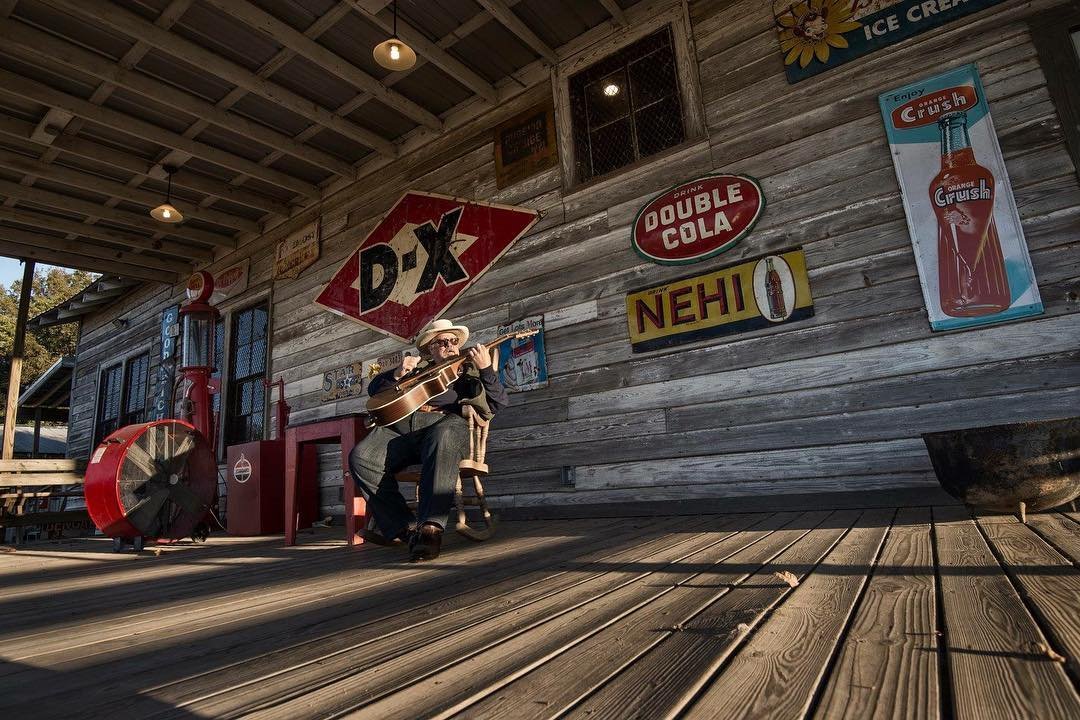 Three days in Greenwood allows you to craft your own schedule with plenty of time to concentrate on the blues, architecture, cooking schools, Civil War history, or whatever strikes your fancy. And with such a variety of attractions, shopping and dining, you can do it without ever cranking up your car or you can venture deep into the dusty Delta backroads. And if you don’t get it all done? No problem: We’ll be right here when you come back!

Museum of the Mississippi Delta
1608 Highway 82 West • 662-453-0925
Weekdays 9:00 a.m. – 5:00 p.m. • Saturdays 9:00 a.m. – 5:00 p.m. • Closed on major holidays www.museumofthemississippidelta.com
Founded in the 1970s as Cottonlandia, this outstanding regional museum will take you time traveling through centuries of Delta history and culture. From prehistoric fossils, Indian artifacts and Civil War history, to the rescued remnants of Chief Greenwood Leflore’s lost mansion, the Museum of the Mississippi Delta offers an eclectic and fascinating overview of this most unusual corner of America. A short drive west of the museum will lead you to Fort Pemberton, site of one of the Civil War’s more eccentric skirmishes. The fabled steamship Star of the West, the first vessel to draw fire from Fort Sumter in 1861, lies buried in the mud of the Tallahatchie River just north of the fort.

Fort Pemberton
Just west of the museum is the site of Fort Pemberton, one of a series of cotton bale fortifications placed to stop Federal boats from making their way down the Delta’s river network to Vicksburg in 1863. Deep in the Tallahatchie’s muddy bottom are the remains of the steamship Star of the West, fired on at Fort Sumter in 1861.

Grand Boulevard
Walk or drive across the 1925 Keesler Bridge and enjoy a mile of century-old oaks lining this wide road from the Yazoo to the Tallahatchie. Laid out across a cotton field in the early years of the 20th century, Grand Boulevard was the dream of Sally Humphreys Gwin, a Greenwood matron who oversaw the planting of hundreds of young trees taken from the riverbanks and plantations around Leflore County. Estate-size mansions and quaint cottages line “The Boulevard,” named one of “America’s Most Beautiful Streets” in the 1950s.

Perhaps it was that Money Road tradition of conflict and torment that led director Tate Taylor to utilize the Whittington House, near the Tallahatchie’s north bank, as Skeeter’s home in the 2010 movie “The Help.” What better location than the south end of Money Road to immortalize this story of racial division and the power of forgiveness?

Civil Rights
During the 1960s, Greenwood was a hotbed of civil rights activity, including visits by Dr. Martin Luther King and Stokely Carmichael, who first used the slogan “black power” at a speech on Broad Street, a site now marked on Mississippi’s Freedom Trail. Bob Dylan and Pete Seeger also made appearances here to rally support for African American voter registration. Pick up a copy of our Remembering the Struggle for Civil Rights: The Greenwood Sites at the Greenwood CVB or on our website.

Downtown and Main Street Walking Tour
(Printed brochures and online map available)
Begin with a copy of Main Street Greenwood’s Walking Tour Brochure, which will lead you past such landmarks as Cotton Row, the 1906 Neoclassic Leflore County Courthouse, the 1914 Carnegie Library and a stretch of retail blocks which date back to the late 1890s. Stroll along the Yazoo River and have your picture made on Keesler Bridge, imagining it swinging into the river’s path as steamboats passed. You’ll see everything from the largest Elks Club in Mississippi (1912) to the renovated structure which housed Fountain’s Big Busy Store (1914), a Delta destination for shoppers. Take time to visit the Alluvian Hotel, a world-renowned resort occupying the 1917 Hotel Irving building. Be sure to notice the elaborate brickwork and ubiquitous iron columns on many of the downtown storefronts.

Turnrow Books
304 Howard Street • 662-453-5995
Lunch Monday – Saturday 11:00 a.m. – 2:00 p.m.
In less than a decade, Turnrow Books has grown into one of the South’s most acclaimed independent bookstores. Best-selling authors drop by for informal signings and readings and the shelves are always stocked with hard-to-find books on the Delta and the South. While you’re browsing, enjoy the upstairs art gallery over a bowl of soup or one of chef Kenny Paschal’s signature sandwiches.

The Alluvian Spa
325D Howard Street • 662-451-6700 • 866-728-6700 Toll Free
thealluvian.com
Located above the Viking Cooking School, the Alluvian Spa is Mississippi’s most sought-out retreat for massages, facials, pedicures and “spoil-yourself-rotten” getaways. From a quick, relaxing massage to a full-day, full-body makeover, the professionals at the Alluvian Spa will make you feel as relaxed as a Delta summer evening

Painting With Friends
214 Howard Street • 662-299-8092  • Website
This instructor-led art class is all about getting social and having a great time while you create your own unique masterpiece that you take home at the end of the class. Please check out the Class Schedule to see upcoming events. They supply everything: the canvas, easel, paint, brushes, apron, and instructor.  You just BYOB and if you’re feeling neighborly, a snack to share.

Dining Options If you leave Greenwood hungry, you have only yourself to blame. Fan and Johnny’s chef is a James Beard Award semifinalist for Best Chef South, and the Ballas family has been rolling comfort food and world-famous mile-high pies out of the Crystal Grill’s kitchen for three-quarters of a century. Giardina’s and Lusco’s feature upscale evening dining choices that range from pompano to porterhouse and Jeem’s Diner boasts the best burger in the Delta and homemade biscuits for breakfast. If you are looking for an ethnic treat, try the 100 year old family recipe egg rolls at Mai Little China on Park Avenue or the Pico de Gallo at San Miguel Taqueria. Turnrow Book Co’s upstairs cafe is the place to go for lunchtime soups, salads and sandwiches, and Webster’s is a cozy neighborhood spot just across the Keesler Bridge in North Greenwood. Other culinary temptations range from Serio’s open-face meatball sandwich to Veronica’s intricate cakes and treats to Steven’s barbecue brisket and famous chocolate cake. Visit our Dining page for more inspiration!